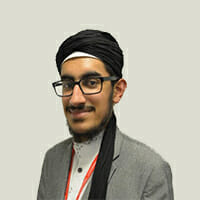 Khuram is both a Student Governor and Walsall College’s Student Union President, taking up both posts in November 2019.

Prior to becoming President, he served as Student Union Deputy President, Black, Asian and Minority Ethnicities Officer and Student Representative. He has also served on the Equality and Diversity Committee.

Outside of college, Khuram is actively involved in local politics as well as being a member of the Youth of Walsall. He is also the Secretary for Friends of Bescot Station, Assistant Secretary for Unite the Union’s Walsall branch and the PR and Social Media Manager for the Walsall Trades Union Council. In addition to this Khuram is a candidate for the National Union of Students, National Scrutiny Council and will be running as a candidate for the Youth Police and Crime Commissioner for the borough of Walsall.

He is studying Level 2 Diploma in Applied Science.