Home » News & Blog » Creativity in the safe hands of designers, Hamza and Diana after competition win

Creative flair with a hard-hitting message has led to competition success for two Walsall College student graphic designers. Hamza Shaebi and Diana Policane are the winner and runner-up in the Worshipful Company of Glovers of London’s Safety Poster Design Award.

They will receive £500 and £250 cash prizes which are being presented at a formal luncheon in a City of London Livery Hall in July.

The Level 3 students were challenged to take inspiration from art, artists and painting styles in order to design a safety poster encouraging professional or home DIY painters and decorators to stay safe and wear protective work gloves.  The poster required strong impact, a hard-hitting headline and bold colours and graphics to grab the attention of the workers and personnel they were intended for.

Hamza’s poster featured a model hand covered in statue-style cracks as a way of highlighting the physical wear and tear resulting from a lack of a protective covering.  He also packed a punch with his ‘wear the gloves’ poster headline which included an expletive hinted at using asterisks.

“Being a competition winner is a mind-blowing feeling,” said the 18-year-old.  “I’m really proud of my work and the risk I took with the wording I used in my headline.”

16-year-old Diana pursued the fine art route with her poster.  She edited a photograph of a hand to make it appear as a digital drawing.  She then covered this in a royal blue filter of paintbrush strokes, some of which smeared the fingers.  Her headline message referred to the corrosive pigments contained in paint.

Commenting on her runner-up achievement, she said: “I am working towards becoming a graphic designer so this gives me a whole lot of confidence.  I initially struggled with the brief and played with a few different ideas before going with theme of paint having a lasting effect on the skin as well as the surfaces being decorated.” 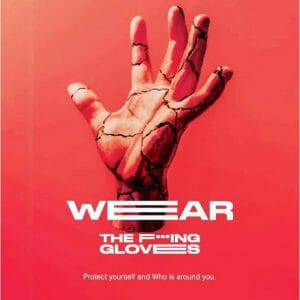 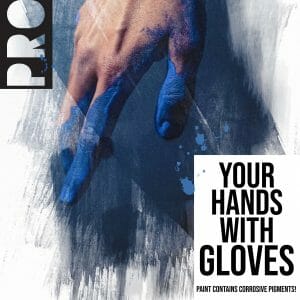 The Worshipful Company of Glovers is one of the City of London’s ancient Livery Companies.  Its annual student Glove Design and Safety Poster Design competitions encourage practical and innovative glove design and an awareness of hand protection in an industrial environment.

Lecturer, Barry Shearn added: “This is a fantastic achievement by Hamza and Diana, particularly as they were competing against students on university-level courses.

It’s exciting that their contrasting creative approaches captured the interest of the competition judges and reflects the high calibre of work they are already producing.”