Travel and tourism lecturers, Suzy Richards and Gina Turner, along with Learning Mentor, Lin Cullen are taking to the skies this weekend (July 3rd) to raise money for the charity, Smile for Joel.

The tandem skydive marks the sixth anniversary of the Tunisia terrorist attack where Suzy’s son, brother and father lost their lives.

The trio will join 35 of Suzy’s relatives, friends and the charity’s supporters for the tandem skydive, at Whitchurch Airfield in Shropshire. Each person taking part represents one of the 38 individuals who lost their lives during the attack.

The group are on course to raise around £40,000 for Smile For Joel, which helps families who have been affected by murder with financial support.

“Every person and family that Smile for Joel supports has different needs,” said Suzy.

“If they need help with paying bills or they need to get away for a weekend, we will pay for it for them.  It is all about making smiles.” 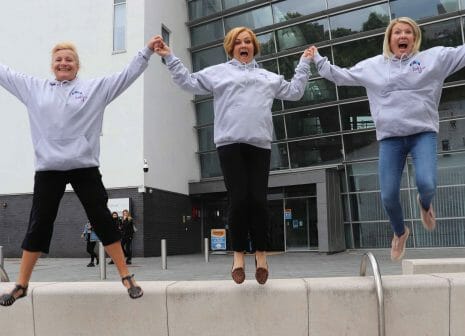 This is the first time Suzy, Gina and Lin have taken part in a skydive.

Lin continued: “I was initially petrified at the thought of doing something like this.  Now I feel really positive about it. It’s great to be doing this with such an inspirational woman, who does so much – and who keeps a smile on her face.”

Gina added: “This is a brilliant way to finish the college year, support my friend and colleague and of course, support such a fantastic cause.”

Find out more about Smile For Joel here and make a donation to Jump for Joel here.