The West Midlands has a rich history, steep with beautiful historic brick buildings that are still home to important lines of work, even today. From libraries to public courts, there are lots of brick buildings that have stood the test of time, partly due to how they were built.

Terracotta clay was a popular choice of building material in the 1800’s, when many of the buildings on our streets were first constructed. It is because terracotta is a highly diverse material that can be moulded and shaped into intricate designs and is highly durable. Even though many of these buildings are now over a 100 years old, they still possess that vibrant deep red colour you find in terracotta buildings. Keep reading as we explore just a few of the magnificent buildings around our region. 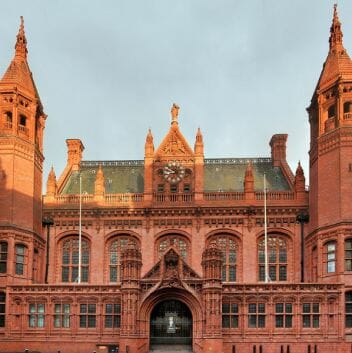 The law courts in central Birmingham really do stand out as an architectural beauty. The vibrant red terracotta colour covers the entirety of the building and makes an impression even today. It is decorated even further with intricate terracotta ornamentation and houses a statue of Queen Victoria above the main entrance. The interior however, is faced with a yellow terracotta, but still includes the same beautiful ornamentation.

As terracotta was a cheaper building material compared to stone, it was often used to construct civic buildings, like the law courts. 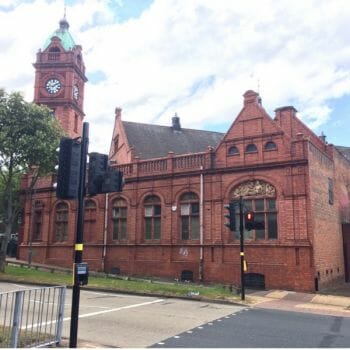 It wasn’t uncommon for many public libraries to also be constructed from terracotta and one that stands out is the gothic Bloomsbury Library in Nechells, which was constructed in 1892. The striking Grade II listed building is a landmark in the area, with a towering entrance and a wedge shaped footprint. Unfortunately it closed in 2013, due to flooding. The police station and adjacent custody suites are another grand feat in Birmingham’s architectural history. The Birmingham Central Custody suite is one of the oldest remaining custody suites in the country that is still functioning today. The red terracotta building can house over 50 detainees, which is why it is often described as a mini prison.

Whilst the station itself is not classed as a listed building, the custody block was given Grade 11 protection in 1982 due to its intricate design. The three story building has been decorated with lots of beautiful ornamentation and also includes a slate roof. 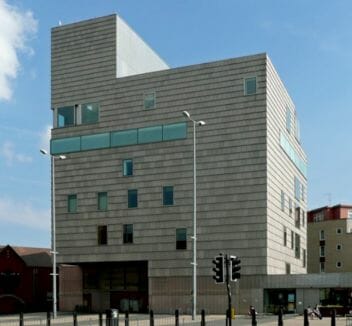 Even locally, The New Art Gallery Walsall, which opened in 2000, was nominated for the RIBA Stirling Prize (an award for architectural excellence across the UK). The exterior of the building was constructed using a pale terracotta tile with accents of stainless steel blocks. As for the interior, the designers opted for other natural materials including Douglas fir wood, to create a feeling of warmth as you explore the building. The Gallery itself is a flagship cultural symbol in the area for the arts, music and history.

As beautiful as it is, the use of terracotta started to decline as more affordable building materials made an appearance, which included concrete and steel. This was also coupled with increased smoke and pollution, which often blackened the red terracotta buildings over time and became almost impossible to clean away. All this gave way to the more modern simplistic buildings we see today.

Whilst terracotta isn’t used as widely today, brick is still a common building material that requires skilled workers to help construct it. At Walsall College, we have a purpose built bricklaying workshop that can provide you with the skills and experience you need to build a career in the bricklaying industry.

Apply now to secure your place for September.  See our Bricklaying courses.

Why the construction industry is in need of more bricklayers