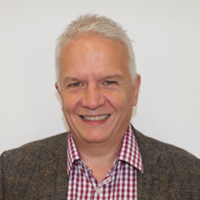 Prior to this, Alan worked as a Director for the University of Law (ULaw) developing the University’s response to the implementation of solicitor and paralegal apprenticeships. This included working with Walsall College, as both institutions shared a focus for delivering qualifications that have a direct line of sight to a job. This apprenticeship development work was undertaken initially as a consultant through his own company and then as a senior employee of the University. Before his work with ULaw, Alan was the CEO of Skills for Justice (for seven years), the UK Sector Skills Council for the Justice sector which included, the police, military, fire and rescue services, prison services and Her Majesty’s Courts and Tribunal Service.

Alan is keen to bring his business skills developed with a range of profit and not for profit businesses and industries, to support Walsall College in achieving success for all its students and the wider Walsall community.

In his spare time, he enjoys running around a rugby pitch every Saturday as a referee.

He was awarded an OBE in 2004 for Services to Sustainable Development and holds a first class degree from the Open University and an MBA from Henley Management College.

Alan was appointed to the Corporation in May 2016. Alan was elected as Chair on 25 November 2021.