A Walsall College lecturer, who lost three members of her family in a Tunisian terror-attack, spoke about her experience on the closing day of the Anne Frank + You exhibition, which highlighted the dangers of prejudice and discrimination.

Suzanne Richards’ father, brother and eldest son Joel were murdered when a gunman opened fire at the beach resort of Port El-Kantoui, Tunisia in June 2015.

The college tutor joined Taliban survivor Ahmed Nawaz, as well as Mindhu Hornick, the last remaining Holocaust survivor in the West Midlands, to address an audience of 180 visitors to the Anne Frank + You closing event.

Walsall College students who volunteered as exhibition tour guides for local schools were presented with certificates during the event, and were given an Anne Frank diary signed by Mindhu Hornick.

Funded by the Department for Communities and Local Government, the exhibition began on 10th November and was part of a UK tour, following a London launch. Walsall College was the venue for the exhibition’s Midlands run, which featured artwork, photographs and stories that explore the various ways hate and prejudice can manifest, including racism in football, street crime, and terror attacks.

The exhibition was presented by the Anne Frank Trust UK – an education charity that uses the diary of Anne Frank to empower young people with the skills, knowledge and confidence to challenge all forms of prejudice and discrimination.

Ahmed and Mindhu also spoke at the Anne Frank + You launch on 9th November, which was attended by over 100 people. 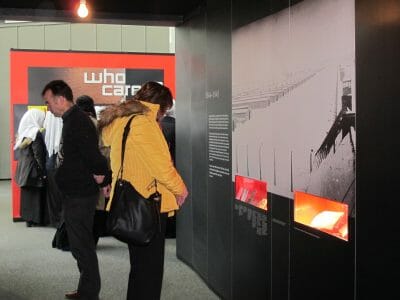 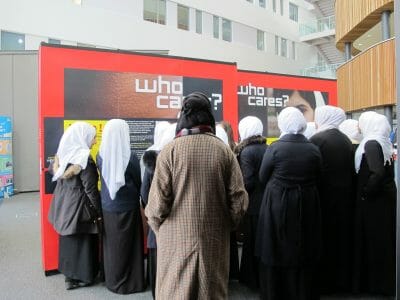 16-year-old Ahmad Nawaz was shot in the arm when Taliban terrorists stormed his school in Peshawar in 2014. His younger brother and dozens of friends were among over 140 mainly young people murdered in the attack.

Mindhu Hornick, who was just 12 years old when she was sent to Auschwitz along with her mother, sister and two brothers. She and her sister were the only ones to survive.

Anne Frank + You drew on the life and times of Anne Frank to deliver powerful lessons about the dangers of prejudice and discrimination in the present day. It attracted over 3000 visitors during its month-long run at Walsall College.

Carol Egan, Director of Student Journey at Walsall College said: “As a college, we make it our mission to ensure that staff and students can study and work in a safe and welcoming environment, and that involves ensuring that everyone is aware of their rights and responsibilities.

The exhibition was a good opportunity to raise awareness of radicalisation and extremism, and for our visitors to understand the importance of compassion and respect in creating a strong and harmonious society. Here at Walsall College, we embrace these values, along with equality, diversity, democracy, rule of law, individual liberty and mutual respect.”

We have had some fantastic support, with over 3000 visitors attending the Anne Frank + You exhibition. We have had a wide range of people visit the college to see the exhibition, from primary and secondary school pupils to members of the public. The feedback has been overwhelming, and many have told us that the exhibition has further enhanced their understanding of prejudice and discrimination.

To find out more about Walsall College, please visit www.walsallcollege.ac.uk.