It was all blood, guts and gore for Walsall College’s media lecturers David Hastings and Rebecca Harris-Smith, whose independent film ‘The House of Screaming Death’ was crowned ‘Best Feature Film’ at the Midlands Movies Festival.

The film, which stars Dr Who and Bridget Jones actor Ian McNeice, was commended at the film festival, which took place at the Hansom Hall in Leicester City Centre.

David and Rebecca co-wrote and co-directed the film with other local film-makers, including Walsall College technician Kaush Patel, Alex Bourne and Troy Dennison.

Filmed in late 2015 and early 2016, ‘The House of Screaming Death’ was shot at West Bromwich’s Manor House Museum, Walsall and Staffordshire on a budget of just £4,000.

The making of the film involved 100 people, including cast and crew, who all provided their services free of charge.

David Hastings, Media lecturer at Walsall College, said: “Festivals are always brilliant and supportive. Feature films are especially difficult to get recognition as they are naturally a longer length. It takes more time to view them when there are around 85-300 other submissions to see, so it’s especially more endearing when your own film gets picked even as an official selection”

The plot is narrated by the mysterious Architect – played by British actor Ian McNeice – who tells the audience four short stories, each set in different time periods and featuring supernatural beings such as ghosts and vampires.

David and his writing/directing colleagues met Ian at Walsall Comic Con in 2015. The actor – who has also appeared in Ace Ventura 2 – was impressed with the early footage David showed him and agreed to partake in the filming of their horror movie.

“I was over-the-moon! We didn’t tell any of the cast or crew and we shot his scenes in complete secrecy. He has been amazing and really supportive of what we are doing,” he adds. 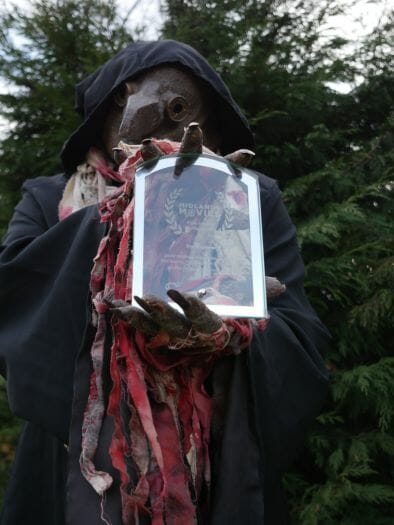 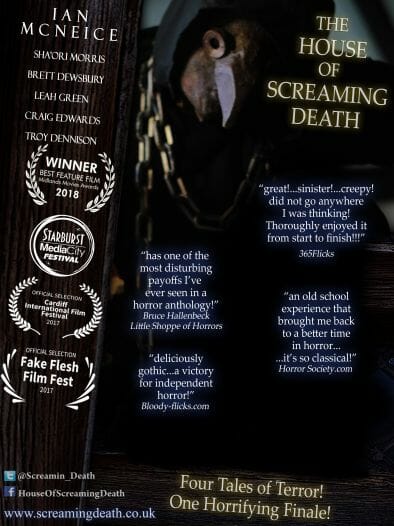 “Many of us are fans of the old British Horror films from Hammer Studios or Amicus, as well as stars such as the legendary Peter Cushing and Christopher Lee. We all grew up on those films, and wanted to not only homage them, but create our own version. There are plenty of nods to those films, as well as other classic horror films such as American Werewolf in London. Even Ian McNeice’s character, the sinister Architect, had his costume modelled on aspects of Peter Cushing’s similar one in the chiller ‘Beyond The Grave’.

The cast and crew brought everything they all had individually to this project, whether in front of and behind the scenes. Me and Kaushy (who co-produced the film with me), are just so happy they’ve all been recognised here. As I mentioned, just being nominated alone was more than we ever could have expected and we were thrilled with that, so winning the Best Feature award was an icing on the cake.”

Walsall College offer a range of Media courses, from BTEC Diplomas in Level 1-3 to HNC and HND Top-Up Degree. To find out more, take a look at our courses online or request a prospectus here.